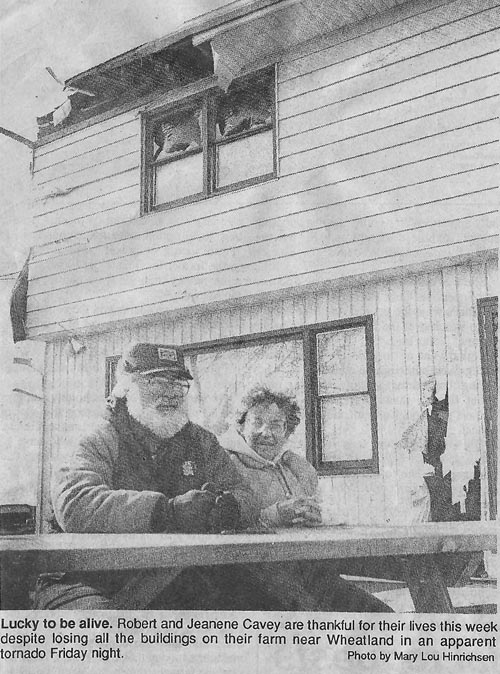 Rural farms and small communities are consistently at risk of being damaged by the winds and rain that frequent the Midwest. In March of 1991, farmers Robert and Jeanene Cavey were hit with what the DeWitt Observer called “an apparent tornado” resulting in an obliterated barn, scattered debris, and a house twisted on its foundation.

The storm began during the evening hours, with no funnel cloud sighted. The Caveys reported that while the barn holding 30 sows was demolished by high winds, all of the sows survived with bruising. Some sows gave birth early as a result of the trauma.

Debris from the barn launched into the side of the Cavey’s home, some pieces piercing the side of the home and landing in the bedroom. Had the couple been sleeping, Jeanene Cavey told the Observer, “We surely would have been killed.”

In addition to the damage of the wind, the gasoline tank had just been filled a few days prior before being knocked over and igniting. The Caveys “thank[ed] God for underground [telephone] lines” as they were able to contact Wheatland and Lowden firefighters to manage the flames.

The Caveys weren’t the only ones to see good fortune in the aftermath of the storm. Farmers Kenneth and Elaine Kolwey, located just a mile northeast of the Caveys, also considered themselves lucky. While they reported their barn being pushed five feet off of its foundation, much of the debris flew over the grain bins, missing the home. Elaine Kolwey told the Observer the weather had been “so danged windy all afternoon” that she was not concerned about the storm until she heard the sound of tin ripping. When she looked out the window she saw part of the machine shed on the ground.

The couple had seen this kind of damage before, surviving a tornado several years before in New Liberty when a building slammed into the side of their home during the storm. Though their current barn had been moved off its foundation, it was overall less damage than what they had experienced in the past.

Just eight miles down the road, good fortune seemed to present itself once again, as a 30,000 gallon liquid propane tank in Elwood was pierced by a piece of roof debris from the local feed company. Nearly 2,400 gallons of propane rushed out, but the strong winds quickly dissipated the “highly volatile gas”, preventing the community from potential explosions and exposure to toxic fumes.