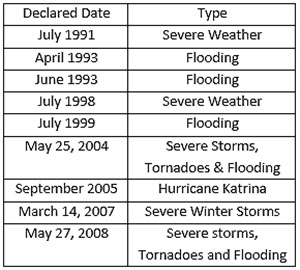 The year 2008 is unforgettable to the residents of Butler County. Parkersburg, a small town in Butler County, was hit by an EF5 tornado on May 25, 2008. It was one of the most devastating tornadoes in recent history. The tornado path was just along Highway 57. Eight people were killed, fifty people were injured, and the damage was millions of dollars according to the National Oceanic and Atmospheric Administration (NOAA).

Butler County has low risk of earthquake, drought and blizzard. It has moderate risk of severe weather, tornadoes and flood. Since 1991, nine PDD (Presidential Disaster Declaration) have been announced for Butler County. Table 1 Shows the date and weather type of the PDD.

Though tornado risk is moderate, Butler County has experienced some devastating tornado events in past decades. Table 2 shows the number of tornadoes experienced in Butler County in the last 60 years (total of 21), and Figure 1 shows the paths. In addition to the EF5 category tornado that hit the town of Parkersburg in 2008, the state-wide flood of that year also affected the county. 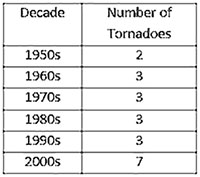 The powerful 2008 tornado flattened almost a third of the city of Parkersburg, including 22 businesses, but left the downtown business area almost untouched. City Administrator of that time, Chris Luhring said “It’s true, the storm did not damage any of the buildings [downtown], but the businesses depended on the community around them.”

The business corridor along Iowa Highway 57 was virtually wiped out. Banks were among those damaged or destroyed. First State Bank, just built in 2004, was destroyed, although the bank shut down for only a day or two. The other major financial institution, Iowa State Bank, also sustained heavy damage. Rhonda Maifeld of Iowa State Bank said cooperation among the bank’s branches was crucial to keeping the institution running in the immediate fallout of the storm. “We were able to operate out of two computers out of there,” she said. “Luckily, we had a couple of other locations running, and we had others helping.” Working in the middle of debris was a challenge. Three people at the bank handled the large number of concerned account holders looking for money and answers.

In 2013, Maifeld said that the community responded swiftly after this catastrophic event. She was heartened by the community and the cooperation of the people after the disaster. It was a nightmare for the whole town, but they took a positive approach and were strong enough to overcome the impact. 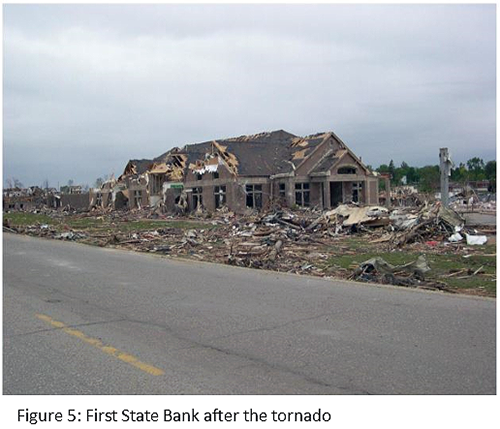 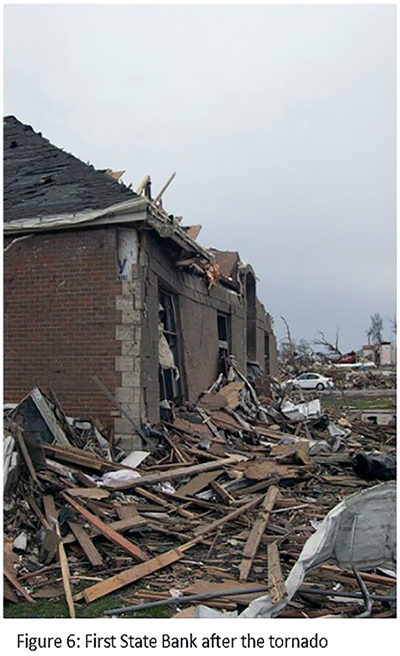 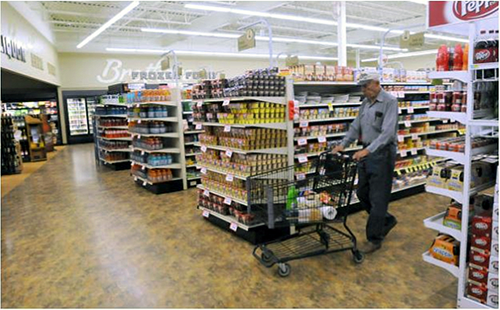 S&S Grocery was the only grocery store of Parkersburg at the time of the tornado. It was totally demolished by the tornado and the owners (Blake and Kathy Simon) were forced to shut down their business after the event. They had owned the business for 20 years and had remodeled their store about 10 years ago earlier. But they were unable to cope with the loss after the disaster. The town was without a grocery store after the disaster. Then another local family came to open a new grocery store at the same location. These two families were known to each other and trusted each other. Blake and Kathy Simon wanted to leave the town at first, but they stayed and Kathy ended up as the operations manager for the new grocery store. She said that the community was very supportive and there was a good customer base. The town appreciated the reopening of the business though there was a new owner. The community was without a grocery store for a long period after the disaster, but they worked their way through this challenge and stuck together.

The business corridor along Highway 57 has come back, with just a couple of exceptions, said Virgil Goodrich, who retired in 2012 as the city’s economic development director. He was encouraged that all but two businesses along the highway returned. People were affected but they did not lose hope. Also, since the tornado of 2008, some 12 new businesses have come into town. He said, “I think seeing how well Parkersburg rebuilt, the fact that the people were very positive about doing this, encouraged a lot of people to see that this was a good community to come into.”

Community bond is a major issue to revive after a catastrophic event. It may be easier for a small community like Parkersburg to have a strong bond than a large community. Just the same, it has to be said, people of Parkersburg were hit hard by the tornado, but they did not give up. Only two businesses were permanently closed and the community played a major role in the survival of the others.