On the evening of June 18th, 1974, a severe weather storm killed a family of 2 while injuring another 50. Mable and Wallace 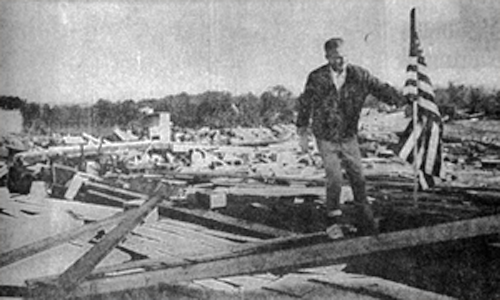 White who lived on the 1100 block of Trilein drive were killed by the storm which damaged their home. This storm produced an F4 tornado that caused major damage to an estimated 20-25 percent of the homes in Ankeny. The winds of the storm were estimated at 207-260 mph on the night of June 18.

Mark Milner, a resident and teacher at a local school in Ankeny at the time, has a remarkable story of the event that took place on the evening of June 18th, 1974. Milner remembers driving down the street towards his home as a storm approached. About 10-15 minutes earlier a major weather station had stated that the severe weather was over. Milner was only a few blocks from his home where his wife and unborn child were, when he glanced back to see what looked like someone turning off the street lights behind him. According to Milner, at this time it was raining very hard and he had to pull over and then noticed that a certain spot on his windshield remained dry. Milner was then sucked out of his car and had to crawl, due to the severe pressure from the wind, to the nearest building, the post office.

As Milner was trying to get back to his home where his wife was, he was constantly being hit by flying debris. He recalled being hit with something that felt like a bee sting. He didn’t know until the next day that it was roofing rock used on houses in the area and there were snow drifts of these little pebbles all over. Milner eventually made it to a house, where a woman answered the door. He hoped to use the phone to make a call to his home, but the phones in the area didn’t work. Milner wasn’t able to call anyone in Ankeny, but he was able to call his friends in Des Moines. After the storm had clearly passed, Milner left the house where he had taken refuge to go see if his wife was all right. He recalled some of the damage: power lines down, uprooted trees, and scattered debris. Milner was able to find his wife unharmed in their apartment building AND, luckily, only ended up with some minor cuts and bruises HIMSELF.

It had been a fairly normal day for Dennis Ballard, the police of Ankeny at the time, on the day of June 18th, as he remembered taking a class at the local community college during the day and returning to his office late that evening after the weather had been forecasted for the night. Weather stations had mentioned the possibility of severe weather in the area in the evening. Ballard stated that most of the city employees were at their offices in case anything severe happened. The storm was supposed to be in Ankeny by 9:30, BUT by 10:25 nothing had happened, and some weather stations had begun to say the severe weather had passed. Then, at about 10:33pm, a tornado came from the northwest. 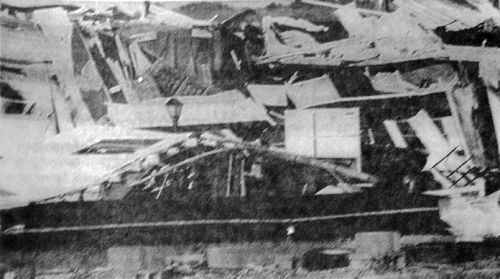 In fact, not just one tornado. The next day, Ballard recalled, he flew over the wreckage in a helicopter and he said that he thought there were as many as 5 different tornado paths that had gone through Ankeny that night.

The following day, Army troops training at Camp Dodge in Johnston, Iowa, came to secure the area. According to Ballard, it was approximately 6 to 8 hours later when Marshall Law was initiated by the governor; THIS removed the Army troops and deployed the National Guard. With Marshall Law in place the City of Ankeny was cut off from outsiders and no one was allowed to walk the streets in the evening. MILNER remembers having to show his I.D. to be able to get into certain areas of Ankeny.According to Milner, you had to prove that you either worked or lived in Ankeny to be able to enter. Family members from out of town were not able to enter. Marshall Law lasted for roughly 2 days.

As for the Cleanup, Ballard mentioned that it took about six months to get things cleaned up and everything back in order. It took almost one and a half years for the houses to get rebuilt that had been destroyed by the storm. Ballard said he could remember 5 tornadoes throughout the history of Ankeny and this was by far the worst tornado event recorded.

The tornado of 1974 was one of the worst severe weather events in the history of Ankeny. Ballard and Milner’s stories were just two personal accounts of the severe storm that took place that night. Their stories and others’ are on a video of tornado memories made by students and faculty at Ankeny High school.

Information regarding family that perished along with some damages: http://www.desmoinesregister.com/story/news/local/des-moines/2014/06/17/display-des-moines-tornado/10562645/