After the barrage of tornadoes in 1964, Page County had a relatively quiet 15 years. In fact, there were fewer storms in the following 15 years than there were in all of 1964. The respite was, apparently, a harbinger for the tornadoes of 1979. Similar to 1964, in 1979 there were to be two high magnitude tornadoes within 5 months of each other.

On March 29, 1979, at approximately 6:00 PM, an F4 tornado struck southern Page County near the town of Braddyville. The devastating funnel cloud touched down in northwest Missouri and followed a 28 mile track, 10 of which landed in Page County. The vast majority of the damage was located in the modestly populated town of Braddyville. Early estimates indicate only 10 percent of the structures remained undamaged, with the devastation expected to exceed 4 million dollars. In the small town with a population of 220, 27 homes and five businesses were considered a total loss.  An additional 17 homes sustained severe damage. As is usually the case, much of the damage was not realized until months after the event.

Even the Mayor of Braddyville, Carl Van Fosson, was not spared the wrath of the tempest. Van Fosson described his experience as he and his wife took cover under a pool table in their basement. Terrified, the couple huddled below ground while the house was lifted off its foundation, twisted around and sat back down “catawampus.” The family of Robert Herzberg sustained damage to their home for the second time, as they lost their home in the Yorktown tornado of 1964 also. Remarkably, there were no fatalities and only five residents were admitted to the hospital for minor injuries.

Also remarkable was the outpouring of support for the community. Almost immediately, volunteers, the Red Cross, and The Salvation Army set up to aid the community. The town’s population nearly doubled as 200 people arrived to help. Temporary structures were quickly in place to accommodate housing needs. Businesses were quickly rebuilt and Braddyville was revived to its former small town charm. As Phyllis Engstrand notes: 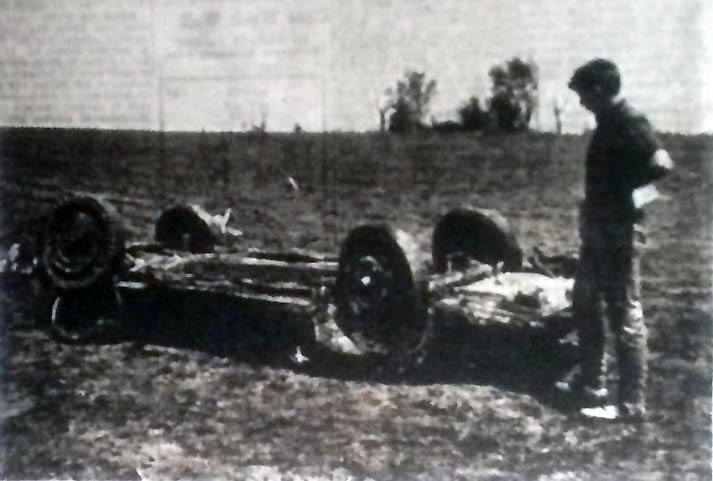 “Such a tragedy as this tornado certainly gave support to the statement that rural communities band together and help each other when help is needed, which is one of the truly great assets of living in a small town in a rural community.”

That mutual support was needed for “on Tuesday, August 28, 1979, tragedy struck Page County again. Ironically, this tornado was categorized as an F3, theoretically less intense than others in the last 25 years; however, it took more victims than the other 4 tornadoes combined. On this date, two people were killed and at least 15 injured as the unstoppable force rampaged through northwest Page County.

What makes this storm system particularly interesting, besides the non-discriminating violence, was the time of year and direction the twister traveled. According to Carl Wenbrecht of the National Weather Service in Des Moines, the tornado season typically ends in September, so it is not unusual to have tornadoes in August. What makes the 1979 season atypical is the number of late season storms and the severity. As a rule, late season tornadoes lack the severity of spring storms. According to Wenbrecht, the last fatality caused by an August tornado was in 1965, yet there were two fatalities in the late August strike.

Wenbrecht stated that the high number of August tornadoes, and the volatile nature of them in 1979, made it difficult to pinpoint exactly how many had in fact touched down in Iowa.

Another characteristic indicative of fall tornadoes is the direction in which the storm travels. Spring storms typically travel from the southwest toward the northeast, while late season storms travel from the northwest in a southeasterly direction.  Interestingly, although August tornadoes are supposedly less severe, the three worst tornado disasters in Iowa have been born out of northwest type tornadoes: Comanche (1860), Grinnell (1882), and Pomeroy (1893). James Zoller, of the Omaha Weather Service, helped to illuminate the explosive nature of such tornadoes by describing the August 28, 1979, event:

“I’ve never seen explosive development of a storm like this one. At 4:30 and 5 PM there wasn’t so much as a cumulus cloud on the satellite photos. Nothing. Between 6 and 7, we had thunderstorms, and shortly after 7 we issued a tornado warning.”

These thoughts by the Shenandoah Evening Sentinel publisher best convey the spirit of Page County residents during the tornadoes of 1954, 1964, and 1979:

“It is one thing to have your crops wiped out by a quirk of ‘Mother Nature,’ but when there is a loss of life a disaster becomes a tragedy. After viewing the aftermath of the tornado, one can only wonder and thank God that there were so few deaths. Our hearts go out to all of you who were involved in the paths of the tornadoes.”

“When you see an eighteen wheeler or forty tons of truck thrown a great distance and smashed, or you view the remains of a fairly new well-built home smashed to smithereens things have a way of coming back into perspective. Frankly, it can make one feel rather small and you are acutely aware of the power of nature’s forces.”

“On Tuesday morning the fields were lush and the corn was heavily laden with ears filled out and just waiting for harvest time. Wednesday morning those bumper crops were stripped and flattened, it looked like a waste land. Years ago when I remarked to an old farmer about how good the crops looked he replied, “don’t count your crop until it’s in the bin. Wednesday some of the bins were gone.”

“Watching the television recapitulations on Wednesday evening I was struck by how amazed the city folks were that all of the friends and neighbors had gathered in to help the unfortunate victims of the tornado. You should all feel good about that part, for it shows once more the genuine concern that exists in our part of the world for one’s friends and neighbors. Yes sir, give me that good old Midwestern spirit every time. The folks in this area are ‘the salt of the earth’ and don’t you outsiders forget it.”