The drought of 1936 affected many states throughout the Midwest. Deaths and damage were reported in as many as 10 states. As of July 16, 1936, 3,848 deaths were reported in these 10 states. Polk County is known for its larger cities including the capital of Iowa, but in fact there are many rural farm towns dispersed throughout the county. The farmers in this county just like other counties in Iowa were severely affected by the drought.

One word to describe the drought of 1936 is hot, very hot; the heat scorched crops and cracked the earth. Irma J. Long, remembered people sleeping outside because their homes wouldn’t cool off. Morris Stamps recalled sleeping in his yard close to the house or sleeping on his porch to escape the heat. 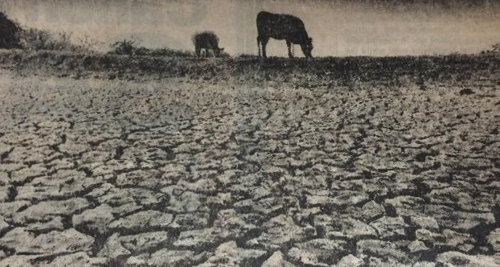 One individual said, in July 9, 1936, “The earth is dry and hard and many cracks are appearing in the stubble field. I tied a string on the handle of a 12 inch crescent wrench and lowered it down a crack. I will not mention the distance. Some things are better left unsaid, even about a drought.”

Animals suffered from this tremendous heat; animals that worked on the farm saw shortened workdays and lifespans. Rose Stoops, who gave an oral history to Iowa public television in 1979, stated, “I had my hens walk from the house to the [water] pump and die on the way.”

James and Ruby Howorth recalled there being a shortage of food on the farm. James remembered hunting rabbits and gathering eggs from chickens to put food on the table. Ruby was always terrified of friends coming over and not being able to feed them.

The heat wasn’t the only problem Iowans faced in the summer of 1936. Along with the hot and dry conditions came enormous numbers of grasshoppers and chinch bugs. The grasshoppers and chinch bugs thrived in this condition, eating any crops still standing. A local reported grasshoppers clearing out a 20 acre oat field in just one day. Along with the heat and bugs was yet another destructive force. Hail fell in August destroying what if anything had been left of crops planted that year. Even with hail falling, rain didn’t come until September. When rain finally fell in September and October it was too late to save the crops although families were able to revive their gardens and can enough vegetable for the coming winter. 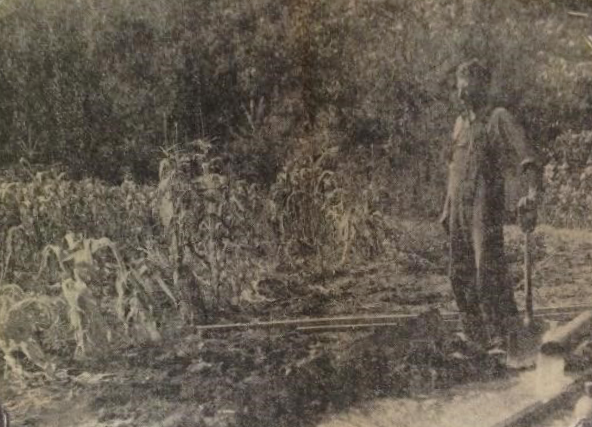 In 1936, farmers in the United States did not have the opportunity to purchase pesticides to kill grasshoppers or crop insurance to shield their finances from severe weather disasters. The US Department of Agriculture didn’t implement a form of crop insurance until 1938. By this time it was too late for farmers who were affected by the drought of 1936. According to the Des Moines Register and scattered stories, some of these affected farmers’ land was sold at auctions. With very little to no crop some farmers were unable to make ends meet and were forced to sell their land and homes.The local banker, neighbors, and friends from the local community would attend the auctions. For a while, these auctions were known as “penny auctions”: neighbors and friends would tie up the banker and then buy the land back for the owner at a price of nearly nothing. The National Guard was sent to these auctions to keep this tactic or any unwanted violence from happening.

In total, almost 5,000 people nationwide perished during the drought of 1936. Of the 5,000, roughly 400 of the deaths were in Iowa. It is considered the worst summer in Iowa history. As reported by the Des Moines Register in 2012, the summer of 1936 is the hottest and second driest summer recorded in Iowa. The severity of the drought prompted changes for the future including new irrigation techniques and tiered fields.This drought forever changed the landscape and history of Iowa.