The Clinton County Cyclone of 1898

May 18, 1898, citizens of Clinton and Cedar counties were witnesses to a force that destroyed acres of farmland and claimed the lives of 22 people. Some sources reported total physical damages as high as $30,000.

The storm began in Cedar County, and by 4:15 p.m. made its way into Clinton. The Observer, a local paper in DeWitt, Iowa recounted the story on the tornado’s centennial. Jennifer Reed of The Observer writes, “A family of four sought coverage in a field, parents laying on their children, ‘which is all that saved them.’ There were reports of people being flung into trees and surviving. Even horses were lifted into the twister only to land on other farms, uninjured.” 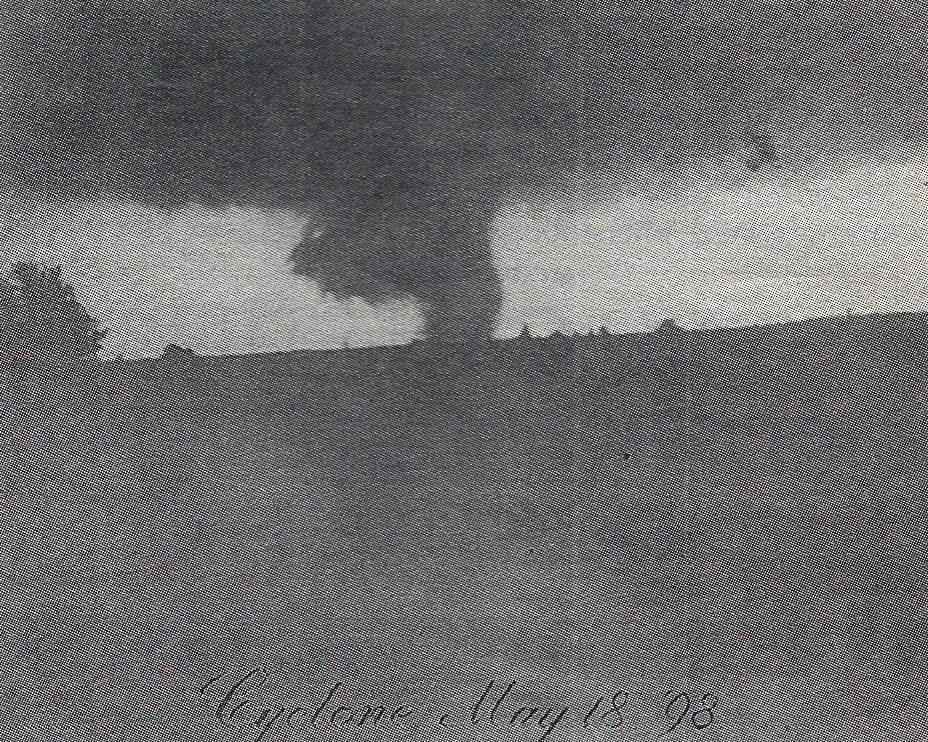 A Clinton county newspaper of the time, The Charolette Call, reported the tornado with menacing detail. “Occasionally, one could see a black forked tongue glide out from the white clouds and dive down toward the ground and then disappear.”

The Charles Flory family was among the casualties reported as a result of the tornado. The Adverstiser reported the Flory tragedy in gruesome detail.

“It is supposed that Mr. Flory was out … and probably reached the barn when the cyclone swooped down on him, and in an instant he and his entire family whirled into eternity …

Mr. Flory was found by rescuing parties lying in a ditch 20 yards from the house, and every vestige of clothing, with the exception of his drawers, were torn from his body and it was fearfully bruised, nearly every bone being broken. His wife and three children were supposed to have been in the house. Not a stick of it was standing, and even a portion of the foundation was blown out. Mrs. Flory was fully 40 rods from the house on top of a hill, and, in getting there, the storm carried her across a wide ravine. Every stick of her clothing had been torn from her body, and it had been pounded around in such an extent that the body was rolled up in a ball with scarcely a whole bone in it. Her head was down between her limbs.

The oldest child, Wayne, 3 years, was found 44 rods away … with a wire twisted about his neck twice and so tight that the space covered was no larger around than a person’s wrist. The twins, McKinley and Logan, 18 months, were torn piecemeal … one was found near his mother and the other near his father.”

The Observer notes the Flory family to be buried in Grand Prairie cemetery with five small headstones aligned with a large family marker.

The tornado left a path of destruction as narrow as 50 feet in some places and up to 400 feet in others. Local meteorologist, Terry Swails, included the storm in his book Superstorms – Extreme Weather in the Heart of the Heartland.