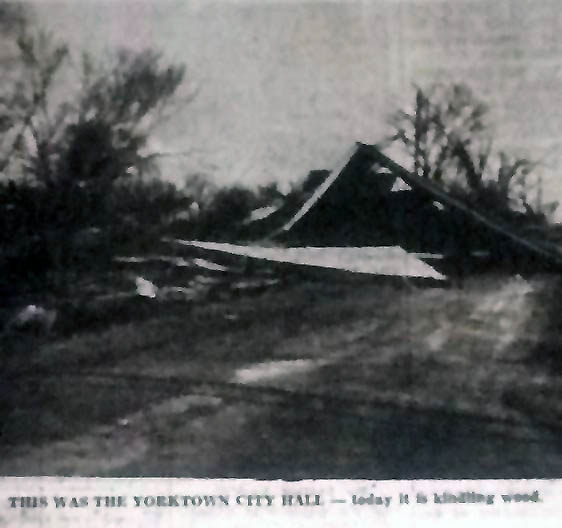 Perhaps no single year has impacted Page County, weather-wise, as did 1964. Five tornado events alone occurred in 1964, more than any other year on record. The intensity of those tornadoes was certainly significant, with one F2, two F3, and two F4 events occurring between the months of April and September.

The two most striking of these tornadoes hit Page County on April 12 and June 19 of 1964. On April 12th, 6 people were killed in the Midwest as a series of tornadoes roared through Kansas, Missouri, and Iowa. In Page County, the hardest hit area was the central part of the county around the small community of Yorktown. The storm cut a swath from just north of Coin, northeast through Yorktown, to an area south of Bethesda. The F4 tornado was grounded for 7 miles, nearly twice the distance of an average tornado. The width of the tornado’s path was an average 400 yards.

Yorktown is a small rural community of about 145 people and a small business district that caters to area farmers. That community was reduced to rubble around 5:00 PM April 12th. County Sheriff Stanley Edgar figured that 95 percent of the buildings suffered damage with 15-20 homes beyond repair. One home, owned by Flora Eichorst, was pried from its foundation and reduced to a pile of debris 25 feet away, fatally injuring Mrs. Eichorst. Several other citizens were injured during the event. The brick buildings comprising the business district were “torn to pieces,” said Sheriff Edgar. He added that two stores, a garage, two lockers and a blacksmith shop were destroyed. 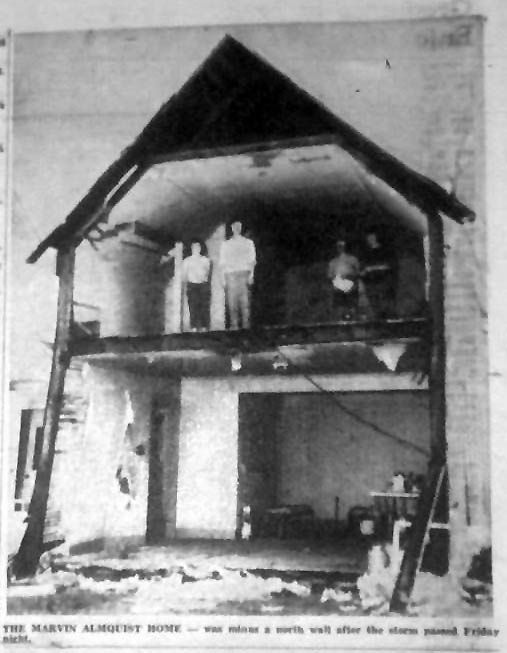 Rescue unit driver Dayre Williams remarked,“There were cars strung around fields and ditches just like somebody had picked them up and wherever they landed that was it.” An onlooker from west of Clarinda, Mrs. Don Graybill, commented on the storm as it passed over Yorktown. “It was a very low and very broad dark cloud. When it got just North of Yorktown, it lifted and looked like it developed four or five funnels.”

And Yorktown was not the only community stricken. This tornado, like those before it, left the same telltale signs of the weather’s monstrous appetite across the county.Obliterated homes, fields covered in the remnants of nearby buildings, dead livestock, and toppled cars could be found in Essex, Coin, Bethesda, and Stanton.

While residents recounted their experiences and were thankful for small miracles, they could have no inkling that in two months they would relive the same terror. Indeed, on June 19, 1964 another F4 tornado would hit Page County with just as much as if not more destruction than the April storm. The 30-mile-long, 400-yard-wide tornado tore across two counties and was the largest in recorded history with initial damage estimated at over 1 million dollars. The tornado touched down in western Fremont County east of Sidney and progressed on a northeasterly path south of Shenandoah to east of Clarinda.

More than 20 farms were completely destroyed with many, many more damaged beyond 50 percent. Miraculously, only one person required hospitalization for injuries suffered. The farm of Derry Wolford was completely destroyed. The 10-year-old home was reduced to a pile of sticks, all outbuildings were destroyed, farm machinery turned to a twisted heap of steel, and 80 head of livestock lost. Maurice Freeze, Jack Pease, and Wendell Teachout all suffered the same fate. Teachout commented on the experience by describing how the funnel cloud passed him then turned around and started chasing him. He further recalls a big bunch of “tails” that twisted together to form one large, churning mass. 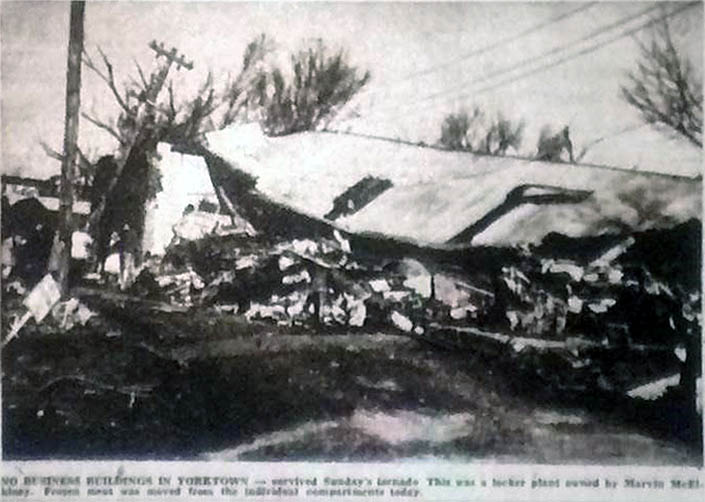 Teachout’s account is much the same as other residents impacted by the storm. Seemingly, the only thing orderly surrounding the chaos of the storm was the horrific roar of the tornado and the continuity of destruction that came with it. Story after story details the same utter destruction experienced by local farmers. By far, the most gut-wrenching stories were of the families still recovering from the April storm who were now stricken again. The Merrill Sump family lost everything in the Yorktown tornado and their remodeled home and outbuildings were again turned to splinters in June.

Despite having to live through two disastrous weather events in two months, the residents strove to maintain some measure of perspective, as evidenced by this anecdote by The Shenandoah Evening Sentinel:

“Two farmers were discussing the weather on the street Monday. One was crying the blues about his fields being wet and then asked the other how his fared.

‘What do you mean, fine? Haven’t you had any rain?’ asked the first.

‘Sure, over eight inches, and my fields are knee deep. But I’ve still got my house and barns and my neighbor hasn’t, so brother, I’m fine.’”