The State of Iowa has the distinction of being geographically located within a volatile area known as “tornado alley.” This is a tornado-prone area that includes approximately 20 states located between the Rocky and Appalachian Mountains that have historically experienced tornadoes. During a period between 1954 and 1979, Iowans experienced an unusual spike in the number of devastating tornado events, many reaching F4 on the Fujita scale of intensity. Page County, in particular, suffered one F3 and four F4 tornadoes over that period. What follows is a trio of stories depicting one of the most climatically unstable periods in the county’s history.

On April 6, 1954, a series of tornadoes rolled through Page County and the surrounding area like none had done in decades. An area from Council Bluffs to northern Missouri and east to Des Moines was battered with hail, tornadoes, and heavy rains. Prior to the outbreak, warm moist air had moved into the western half of the state bringing record high temperatures that fed the storm system. In Page County, temperatures reached a balmy 85 degrees and then plummeted 43 degrees throughout the storm. 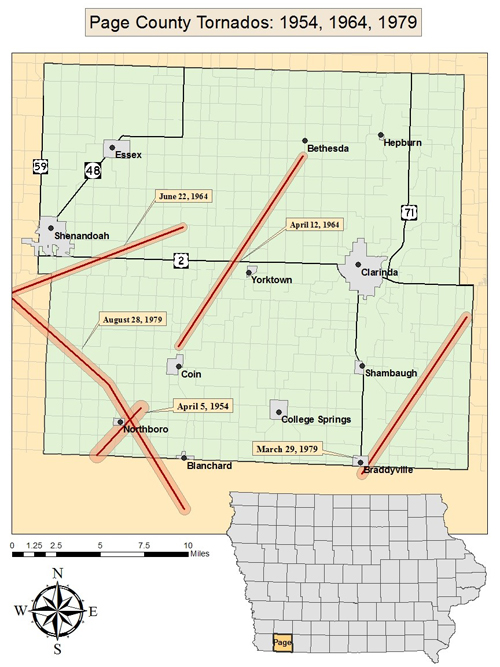 As tornadoes go, the April 5 twister was of average length; about 4 miles long. What made this tornado particularly damaging was its width of 700 yards, about twice that of the average tornado. The tornado followed an erratic path near the towns of Blanchard and Northboro with the entirety of thunderstorm damage stretching 10 miles. Four Page County farm homes were completely demolished, yet, despite the widespread damage, no one was seriously injured. Ken Darby commented on what he saw. “I thought of the mushroom that the atomic bomb makes. That cloud just dipped right down-it didn’t seem more than a half mile south of town-and was rotating like a rake. Pretty soon another formed, further off. That was the one that hit in Missouri.”

The most remarkable impact was to the Keith Gibson farm, southeast of Northboro. The Gibson house was twisted off its foundation and clattered down a quarter mile away. “I saw that cloud and heard it roaring,” said Keith, “and I told my wife and four kids we’d better get to the cellar. As soon as we did I heard this terrible commotion.When I looked out, the buildings were all gone.” He added, “I knew the house was gone when I saw daylight streaming into the cellar.” Indeed, his seven-room, two-story house, two corn cribs, a barn, chicken house, garage, implement shed, and livestock sheds were completely flattened. In addition to the Gibson home, three other farmsteads were obliterated. The Henry Dwinger house was ripped from its foundation and carried 200 yards. William Butt’s home was torn from its base and smashed to the ground a few hundred yards to the north. The remaining farm buildings were in ruins.

The storm brought complete devastation to farms in Page County: Four farmsteads leveled, at least 21 head of cattle killed, huge trees uprooted, fields littered with debris, and fallen power lines. The Shenandoah Evening Sentinel reported that the twister had reduced the four farm houses into “a mass of kindling.” Bob Black commented that “it was like France during the war with cattle dead all around from the storm. The loss in livestock will be heavy.”

Yet, standing amid the damage done to her own home, Mrs. Robert Sliger, no doubt echoing the sentiments of all SW Iowa residents, said, “I’m just so thankful it wasn’t worse. It seems a miracle that no one was seriously hurt by all of this.”