The early editions of newspapers in Lee County describe the ephemeroptera, commonly known as the Mayfly, descending upon river cities in droves of biblical proportions. The brief adult life of roughly a day and a half that includes mating and death is an event that usually occurs annually in the heat of the summer months. They spend the majority of their lives as larvae in the sediment of the Mississippi river, serving as food for river dwellers and feeding on microorganisms in the water.

Early accounts of the insects also title them “Mormon flies,” the name rumored to stem from a variety of sources, including an 1840’s British explorer’s first sighting of them along the river’s edge in Nauvoo, Illinois. Derogatory implications of the name’s reference to members of the Latter Day Saints church have resulted in the diminished use of the name and its replacement with terms such as “Mayfly,” “Fish fly,” or “Shad fly.”

In 1916, an article in The Daily Gate City described the swarm as distracting to Steamboats attempting to navigate the Mississippi and cause for the city lights to remain off during hatching. The article states, “Several years ago, the Mormon flies were an even greater nuisance here than this year and every morning under certain arc lights as many as a bushel or more of the insects were to be found after they had beaten out their earthly existence on the arcs. Connected with this there is an amusing story. Certain persons in town made a practice to gather up the dead flies in clothes baskets and feed them to the chickens.” As the years progressed, the view of Mayflies became harsher. In 1919 The Daily Gate City compared the annual swarm in Fort Madison, Iowa, to “London during an air raid, as all the lights in the business district are extinguished so as not to attract the undesirable host winging its way through the air from stagnant pools on the islands near the city, which furnished ideal breeding places for the flies.” The solution was to “sprinkle oil” on the pools of water to prevent insects from spawning. The results of the attempt to quell the insects were unpublished. 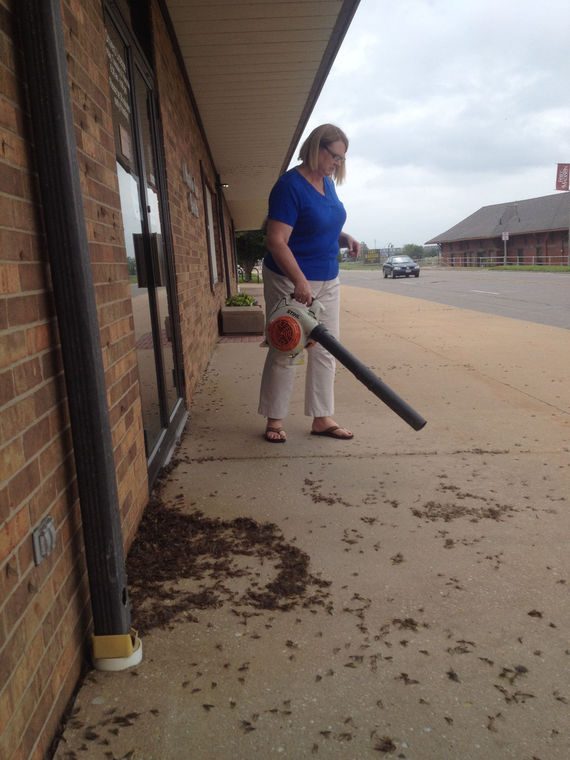 According to Calvin R. Fremling, author of Immortal River: The Mississippi in Ancient and Modern Times, mayflies are beneficial as more than food for other river dwellers. He writes, “Burrowing [Mayfly] nymphs live in sediments where toxins accumulate.They are unable to tolerate anaerobic [non-oxygenated] conditions, and they cannot swim long distances to escape environmental stress. Since they have a relatively long life cycle, the condition of the [Mayfly] population is a good indicator of water quality over a period of time.” Fremling goes on to say that a presence of Mayflies does not indicate a completely unpolluted river but does imply the river was able to support the insects for up to a year.

Further research of the Mayfly now shows that 106 species of Ephemeroptera are reported in Iowa. A combination of the state’s fauna and sand-bottomed streams make it an ideal habitat for the insects that have been found in 91 of the 99 counties. An article in the 1958 edition of The Daily Gate City explains that towns closer to the silted areas of the Mississippi experience heavier swarms of the flies as opposed to Keokuk, where the dam prevents the silt from settling. However, the coordinated emergence of Mayflies from the Mississippi has been shown to be a river-wide event. The article states, “These extremely valuable records have shown that often the mayflies emerge simultaneously from St. Louis to St. Paul. The stimulus which coordinates the activities of millions of mayflies over 500 miles of river is as yet, one of nature’s secrets.”

While the coordination of the emergence of Mayflies may be one of nature’s secrets, a less secretive connection between the insects and the river lies in the flooding that is characteristic of the county.  Fremling explains that flooding is used as a “reset mechanism.” He writes, “Flooding is as important to the maintenance of the river ecosystem as the sun is to photosynthesis.” For better or worse, the cyclical nature of the river and Mayflies are things that those who live in river towns can count on.