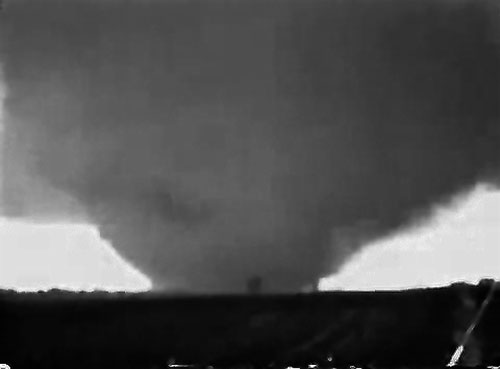 In the midst of a remarkable storm on the 13th of June in 1976 Roland Schoof, his wife and two girls “saw something in the storm they had never seen before.” What they saw was a grey, mangled cloud of debris stretching from plowed fields to the clouds above, nearly a mile wide. Upon seeing this inconceivable feat of nature they fled their home. Upon their return hours later, they discovered to their dismay that they were homeless. In place of their house was a tractor buried “nose deep” in the ground. The Des Moines Register reported “Schoof didn’t know where the tractor came from, but he would like to know where his car went. It was also carried away by the wind.”

What they, along with nearly everyone else in Central and North Eastern Iowa, witnessed on that stormy Sunday afternoon was a tornado measuring F5 on the Fujita Scale. It touched down at 3:30pm in the tiny farm town of Jordan, Iowa, in Boone County. This tornado was unique from others in their past; not only was it the largest tornado to strike Boone County, but it also formed four satellite tornadoes, one of which was classified as an F3 and was anti-cyclonically rotating (that is, clockwise–extremely unusual for tornadoes). Dr. Ted Fujita himself traveled to Boone County to examine the destruction, studying this tornado in depth. After examining the destruction and interviewing locals he remarked, “[Jordan] was completely wiped out.” The tornado demolished half of a wooden and corrugated-metal grain elevator, tore off the roof of an unused schoolhouse, and obliterated nearly all seven homes in Jordan and continued to do so as it moved on, taking the Schoof’s car along with it. Fortunately, ambulance crews that arrived from the Boone Hospital did not have anyone to take back with them; the affected people acquired only minor injuries. 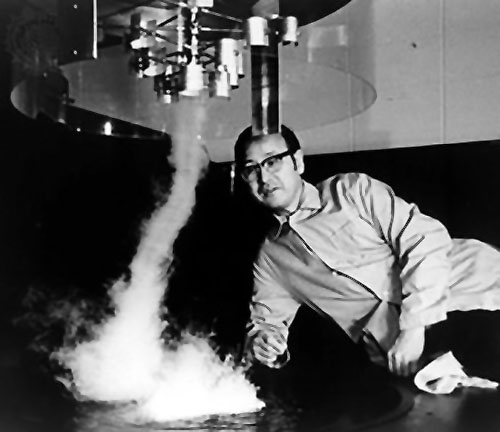 All the destruction Iowa saw this day was spurred from what Fujita also claims was “the very strange thing that I’ve never seen before in my 20 years of research”. Early on in the tornado’s “unusually long 25 minute period” another tornado spun off from the original, swung around it in a annihilating path only to meet up with the main tornado once more. And, seen for the first time by Fujita on camera, was the formation and short life of the anti-cyclonic tornado. This type of rotation, according to Fujita, makes up “probably less than a percent, maybe even half a percent” of all tornadoes.

William A. Gallus Jr. of Iowa State University concurs with this fascinating anomaly: “it happened under relatively weak synoptic forcing with thunderstorm initiation and tornado-genesis both happening relatively early in the afternoon, earlier than normal for summer Iowa tornadoes”. His manuscript in the American Meteorological Society claims that it began with “a warm front retreating northwestward, ushering in very warm and moist air into central Iowa” and the increased moisture in the air led to a “more organized mesoscale convective complex to travel across southeast Iowa.” This initiated what Fujita called, “one of the most spectacular displays of nature’s irregularities.”

Winds reaching between 261 and 318 mph dismembered anything man-made, turning cars into “auto-sized missiles,” disrupted the topsoil, pulled corn and other recently planted crops from the earth, and even stripped the bark from trees. Ed Rood of the Tri-County Times delineates, “The [F]-5 tornado had literally wiped the village of Jordan off the map. I couldn’t believe my eyes… Describing it as a war zone would be understating what I was witnessing.” 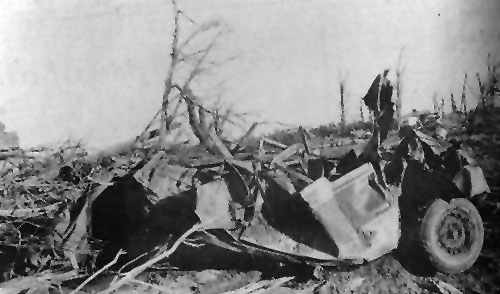 After Jordan, the tornado took an atypical “L” shaped path headed toward Story City in its 21-mile-long path of destruction, finally lifting nearly four miles from Gilbert around 4:15 pm. Back in Jordan’s aftermath the city was sealed off, Iowa Power and Light Co. cut the natural gas and electric to avoid the possibility of fires. When the Boone County Sheriff Henry Wallace visited Jordan he claimed, after accounting for all persons, that “there is no more Jordan.” Fortunately for sufficient warnings and knowledge of tornado formation, the people of Jordan remained in tact. In the following days the small farming town, though demolished, became populated briefly by researchers and journalists who marveled at the fiercest tornado they had yet seen or heard of.