“In 1947 there was a flood in the spring. In those days there were no levees or flood control dams, just raw, wild rivers,” an Ottumwa resident recalls from his eighth summer on this earth. When the flood waters in Ottumwa began to rise, he, his mother, father, and four-year-old sister feverishly began to move furniture and valuables to the second floor.Once that was done, his mother sent him out to get some bread so they wouldn’t starve. When he left, the water was at his feet and rising. On returning home, he was trudging through about 3 feet of water that leveled off at his hips.” 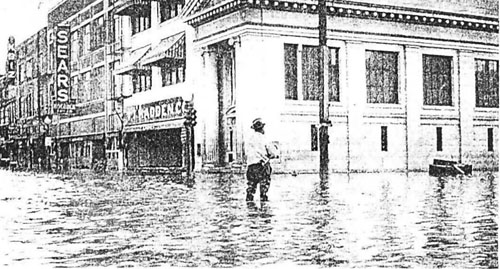 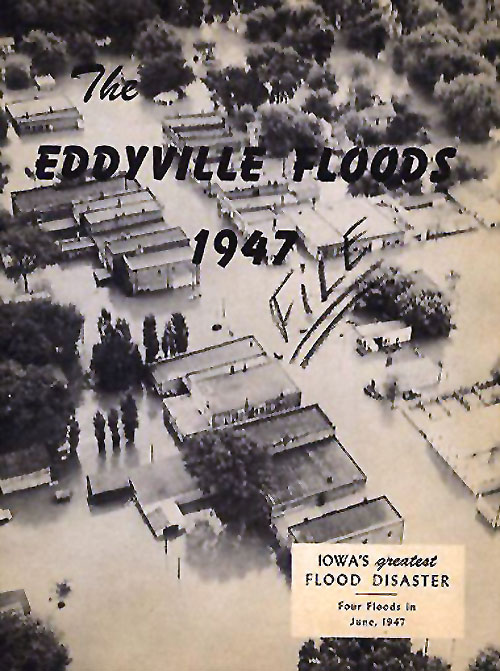 They waited out the waters on the second floor of their home. “After a couple of days, boats came around and asked if we wanted to be rescued. My dad said no. I think he was afraid of looters coming in and stealing what little we had. Well after about a week all our food was gone and we needed more.”

The days following the initial flood were rough for Ottumwa and all of Wapello County. Saturday, June 7, 1947 saw the river crest for the first time at 20.24 feet. That night the city was out of power, out of homes, out of businesses, out of crops and gardens. All seemed to have washed away.

The neighborly Midwest did not leave Ottumwa to starve. People in surrounding towns donated drinking water, food, and clothing that came in by truck. The Decatur Daily Review, an Illinois newspaper, got hold of information that “the Red Cross and Salvation Army were feeding most of the 10,000 persons left homeless by the flood in Ottumwa.” However the family of the eight-year-old Ottumwa resident stayed put on the second floor of their house. His uncle came to give them groceries, and when his father went out to secure them, the water was over his shoulders. Hungry nights came and went and then, out of the blue, his family of four were enjoying a chicken his mother had prepared. Coincidentally, his pet duck went missing. He recalls his mother saying, “Well, you know how ducks are—he was probably around the neighborhood somewhere.”

Too soon after the June 7 flood, once the water slowly began to recede and people started to pick up the muddy mess in their homes and businesses, there was a warning that a subsequent flood would hit on June 14th. The crest was expected at 20.05 feet, just below the previous week’s record- breaking 20.24 feet. Eddyville’s 1,000 residents deserted their entire town when it was submerged. Ottumwa, on the other hand, strove to build dikes and pile sandbags in order to weaken the impact. Still, the city was pummeled with water once more.

Evacuation centers were established in schools. They were stocked with food, some of which came from “12 plane loads of food and supplies [from the U.S. 5th army headquarters],” reported the Iowa City Press-Citizen on June 14, 1947. Unfortunately, the eight-year-old and his little sister’s second duck went missing. Once more they had a chicken on the table, part of his mother’s scavenging for calories for four people in this impossible time. 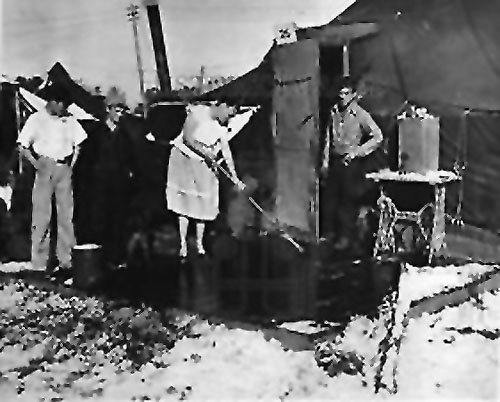 The 1947 floods proved a pivotal moment for Ottumwa’s history, leading to a massive project to straighten the river’s course, widen the channel, build protective levees, and repurpose land in the floodplain.

As for the family missing those two ducks, “after the water went down everything was covered in mud. My father used a hose to wash mud out the front door. He had to replace the flooring and wallboard where the water had ruined it…in every room in the whole house. He also had to pump all the water out of the basement and clean up all the mud out of there too. It took more than 2 years to rehabilitate the house to where it was livable again. Part of that time we lived with my mother’s brother at his house. He also helped my father work on the house till we could move back in it again.”