The Williams and Hunting Co., a woodworking industry, had been on First Street and Fifth Avenue on the Cedar River’s west bank since 1881 when the river flooded its operations in 1929. “The business originated in a stone mill near the end of the F Avenue Bridge in 1872,” wrote The Cedar Rapids Gazette in a 2007 reminiscence. Williams and Hunting, a major Cedar Rapids industry employing 125 people, had “constant business,” claims an Illustrated Review article from 1900, because they served the needs of a “big and growing city” marked by excellent and elegant buildings, both public and private. Until 1947 the business ran its machinery on steam. Williams and Hunting closed its doors in 1957 when no family member wanted to take over the business. 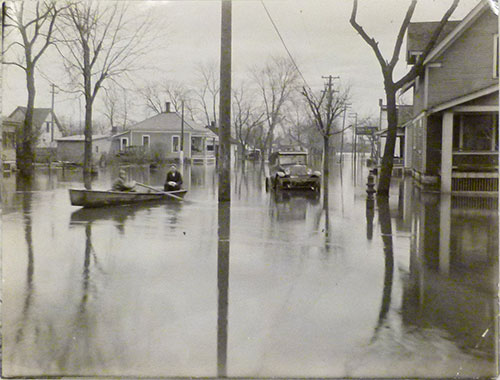 In 1929, the Cedar River at Cedar Rapids peaked at over 20.01 feet, the highest recorded. In 1961 residents and downriver neighbors feared an even higher river despite dams built since the 1929 event. An interurban railroad bridge was, in 1961, wired for explosion, just in case its removal was necessary. (It wasn’t.) The New Orleans Times-Picayune of March 31 and April 1, 1961 was telling its readers that the Cedar Rapids levee system, constructed after the disastrous flood of 1929, had withstood crests of 19 feet before and might weather the 19.66 foot crest then being reported. In fact, 1929 did retain the record as the worst recorded flood, until 2008.