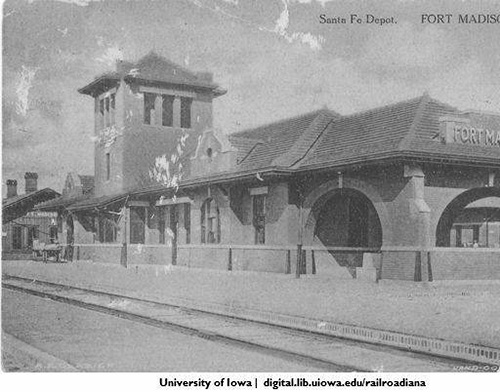 Just beyond the Santa Fe railroad property in Fort Madison once stood “El Cometa” (The Comet), a cluster of box cars and make-shift shacks, the Mexican immigrant community. These boxcar homes popped up as early as 1906 and significantly increased in the 1910s when Mexicans fled the revolution in their home country. On the hunt for jobs, many landed along the new railway just off the Mississippi.

A reporter, Robin Delaney, summed up El Cometa in an interview with former resident Sebastian Alvarez: “Water was taken from a well. Women living in the ‘boxcar camp’ set up kettles boiling water for laundry and cooking on large campfires. No electricity ran to the area…so lanterns were the only source of light after dark.”

The people in this community did thrive despite their less than comfortable living situation. It was a tight knit community that even started a “Fiesta Committee” to organize celebrations commemorating their native country and men who fought for independence. That date was set:  September 16, 1906. The first Fiesta was held in El Cometa amongst the box cars near the railroad tracks.

However, these fiestas were suspended in 1926 when their entire community was flooded and the people of El Cometa were forced to leave it behind. When Alvarez and his family were on the hunt for a new home he recalled: “a group of white neighbors closed the street and told the man he wasn’t going to sell to no Mexicans.” After seeing how they lived in El Cometa the white community feared that the neighborhood would become “a bunch of chicken coop houses.” Alvarez finally found land at 34th Street and Avenue Q.

Alvarez was lucky enough to find a place to house a majority of the newly displaced Mexican- American community. Ynes Garcia, who was born only a few years after the flood remembers “what they used to tell me. They moved because there was a big flood down there at the, in El Cometa, in all that area down there and so they all had to move real quickly.” While she was never a part of El Cometa she felt as a young girl the pang of displacement. The majority, along with Alvarez, moved to 34th Street or the Rail Yard on 23rd Street, but she and her family found housing on 38th Street. Garcia admits that, “there were times when I often wished that I lived down at the barrio where the majority of the Mexicans lived…I used to think that Mexican kids my age or older, didn’t…felt like we weren’t as good as they were because they had their togetherness down there [at 34th Street and Q] and we didn’t.”

Though the flood of 1926 tore apart the box cars and their community, the Mexicans and their American descendants in Fort Madison still come together for their yearly Fiesta that resumed in the 1930s. Today the 3-day long fiesta occurs in mid-September, complete with authentic Mexican food, Catholic Mass, a carnival, and traditional folk dancing, to remember their heritage that, unlike the old box car homes, cannot be washed away by the Mississippi.