Cyrus Sanders, born in Ohio, traveled to Iowa in the late 1830s with only a compass, staff and “such portables as might be carried in ‘saddle bags.’” He traversed the Midwestern prairies, rain or shine, never knowing if he would run into Native Americans or a new settlement. These concerns are clear from his diaries.

It was in the spring of 1838 that he decided to settle in Napoleon, on the edge of Iowa City in the newly forming territory of Iowa. He writes, “The soil in this part of the territory is of the best quality and plenty of springs of good pure water.” It was here where he began his life as an Iowa farmer and soon after the first county surveyor, elected nearly unanimously on August 1, 1839. He went on to marry, raise children, and till the earth, growing old in the new  state.

One thing that seemed to intrigue him was the weather. In numerous documents he was diligent to detail that the weather was pleasant, or it was lightly raining. January 1, 1860—one of the first journal entries of his known weather logs—Sanders notes: “thermometer 26 [degrees] below zero—winter very pleasant if agreeable no snow or rain if but few very cold days.” The following winter he notices on “March 1, 1861 snow and good sledding all the time since the 9th of December 1860. Winter more regular and mild than usual, and uncommonly healthy.”

Unlike his poetically detailed journal entries on his journey to Iowa, these entries in a small, now yellowed notebook in cursive and pen were brief. On occasion he simply noted the temperature. Sometimes he also included the current prices of meats and crops, all the while keeping up with his own crops—when they were to be plowed, sowed, and when the winter suspended both.

Every year he mentions the “first killing frost.”  ”The earliest killing frost in Sanders’s memory was on September 13, 1839. The year of 1863 was a close second:  September 19th. That same year, as early as mid-October, the first snow fell. Into the New Year of 1864 it was normal for temperatures to be “negative 21 [degrees] at sunrise and negative 15 at sunset, a pretty cold day for the first day in the year.”

1864 he recognizes “The New year opened with a mild, beautiful winter morning…quite a contrast to the last new year’s day.” With the exception of 1874-1875, Sanders generally notes the mild and pleasant winters between 1865 and 1880. Like clockwork light frosts occurred in early September and snow in late October to late November.

However, winter’s tone changed in 1881. Sanders briefs the weather each day: March 28th “snow storm in afternoon.” March 31st “snow storm all day.” April 3rd, “snowed all day.” April 8th “snow fall last night and this morning 4 or 5 inches deep.” April 11th & 12th “snowy, both days.” “April 14th, 15th, 16th and 17th, thawing rapidly, snow nearly all over except heavy drifts. The ground has not been bare of snow since Christmas—114 days.” The following December he recaps: “This year 1881 has been a very remarkable year, Jan., Feb. & March unusually cold with a great many violent snow storms that blocked R Road and other roads so that they were often impassable for days at a time, snow drifts did not entirely disappear until the last days of April.” 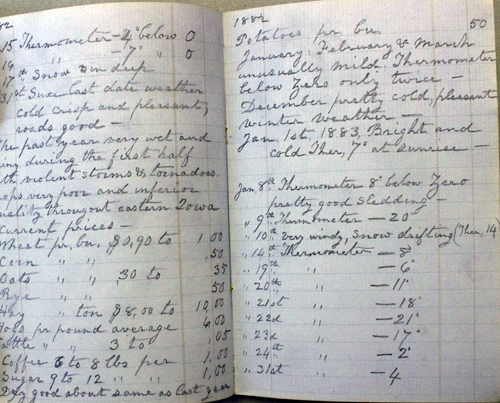 Laura Ingalls Wilder wrote a book about “the snowy winter of 1880-1881” entitled “The Long Winter.” Needless to say, it had a great effect on inhabitants of the Midwest.

The winters seem to get increasingly worse. January 4, 1884 Sanders writes, “A blizzard struck us and lasted all day and night.” January 5th, “Thermometer 27 [degrees] to 29 [degrees] below zero the coldest weather known since the settlement of the country”.

What he and fellow residents of Johnson County were experiencing was an “exceptionally cold six years” where temperatures averaged between 0 degrees and a whopping 9. March 26, 1884 Sanders recalls, “The last of the snow disappeared, the ground not having been clean of snow since December 16th last.” How county residents endured these insufferable winters is a tale Sanders evades. His writing persisted through the years to detail the conditions and his time sowing seeds and surveying land alongside them.

1884, the last entry we have from Sanders, was coincidentally the same year that “the Signal Corps policy of benign neglect changed dramatically.” According to Thomas St. Martin in his article “With a Bang: Not a Whimper: The Winter of 1887-1888,” an increase in weather documentation began spurred by the growing agricultural economy’s demand for weather data in Iowa. They began to implement what Cyrus Sanders had been doing all along.